I visited Virginia City and Gold Hill in the summer of 2010, to gather boots-on-the-ground impressions as I was finishing up A Ghost Town Vampire. But a trip to Virginia City would not be complete without a little ghost hunting. So I set out with the Bats in the Belfry guided ghost tour, armed with my camera, ready to capture the best the ghost town had to offer on a Saturday night. 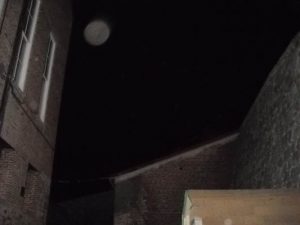 Orb spotted over the yard outside the old Storey County Jail, once the site of the county gallows. While our ghost tour guides readily admitted most orbs are simply the result of dust caught in a camera’s flash, they praised my orb’s regular shape and consistent opacity as possibly supernatural.

The lingering specter of an unjustly hanged man? Or just a very symmetrical piece of dust? I know which makes the better story.

The Storey County Jail, built in 1876, is now the site of the Silver State Peace Officers Museum. Displays include a collection of police badges, vintage firearms, and exhibits on the history of law enforcement in Nevada. Well worth the visit for me, just for the list of Storey County sheriffs. (Sheriff in 1897 – James Quirk – could any author ask for a better name? Though I can neither confirm nor deny the existence of the awe-inspiring handlebar mustache I gave him in The Ghost in the Machine.) 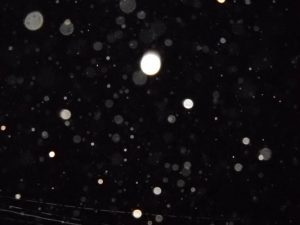 These orbs are most emphatically NOT the genuine article. Silica dust floating high over the former site of the International Hotel, once the site of the first elevator west of the Rocky Mountains. One night in the late 800s, a strange fire engulfed one room in the hotel, without damaging adjacent rooms. Naturally, ghostly activity was reported long after the room was restored. When the entire hotel burned down in 1915, it only added to the mythology of the International. The site is now a tourist parking lot, but psychics still report feelings of rage and fear inside the footprint of the cursed hotel room.

The air over the parking lot was filled with reflective dust that lit up in sparkles every time I took a picture. All the other guests noticed it, and soon I started snapping pictures with the flash just for the light show. 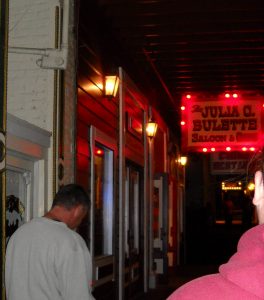 Just outside the Julia C. Bulette Saloon on C Street, one of the portable EMF meters started flashing like crazy. The activity was confined to a very small space (about 1 square foot) and did not react to our attempts to “fake it out” with our flashlights, cameras, or body movement.

This was one of the places on the C Street boardwalk where the planks are coming loose, revealing the 12 foot trench dug underneath the walkways. During the height of Virginia City in the 1870s, Chinese workers were not allowed to walk on the boardwalk, so tunnels were dug connecting all the main street stores to Chinatown, one block down on D Street. It’s very likely our errant energy field was hiding down in the tunnel.

On the other side of the street, we had another EMF meter spike while searching for the ghost of a small girl run over by a stagecoach. No photos, unfortunately, as our tour ghosts insisted we hide them in our bags, as the ghostly child has a phobia of flashbulbs. 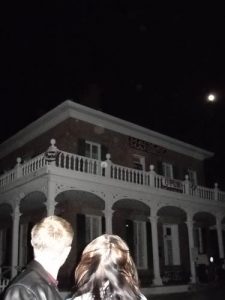 Mackay Mansion. This historical site was originally built as the company offices for the Gould and Curry Mining Company. Recently restored and now open as a museum, the Mackay Mansion is home to several apparitions, including the famous Little Girl in White, who visited Johnny Depp while he was filming the movie Dead Man.

You can see a couple of specks caught in the flash. They are unlikely to be genuine orbs, based on their transparency. Most likely more of the dust kicked up along the roadside as we shuffled about trying to get the best angle for photos. 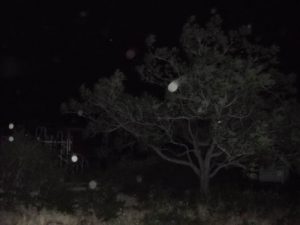 Just below the C Street boardwalk, north D Street was the site of prostitutes’ “cribs” and opium dens, including the home of the infamous Julia Bulette, a folk heroine made famous largely by her sensational murder. Legend has it a local undertaker was so enamored of her that he substituted a dummy in the closed coffin and buried her body in the basement of his house.

Further south on D Street, the Mackay Mansion and the elementary school are the site of frequent hauntings, including tales of black cats walking through walls, and grief-stricken ghosts.

This tree is called the Orb Tree for the high number of orb sightings. It sits just across the road from the Weeping Tree, where people have claimed to hear a woman softly crying. After a few unremarkable photos, I took this picture, which shows a coveted “moving orb” with a comet tail. 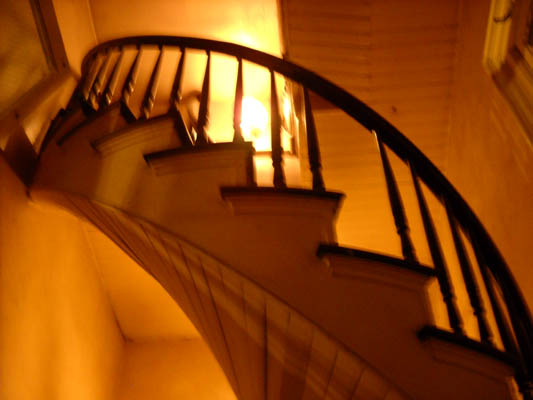 The ghost tour ended at the Old Washoe Club on C Street. Once a 3 story gentleman’s club, it declined after the silver bust, and while the saloon is still open, the upper floors are in need of extensive repair, and are currently closed to visitors.

The “floating” staircase is the world’s tallest spiral staircase without a pole support. Several ghosts have been photographed descending the staircase in the past, and there are plans to build a paranormal museum in the rear room of the Washoe Club. 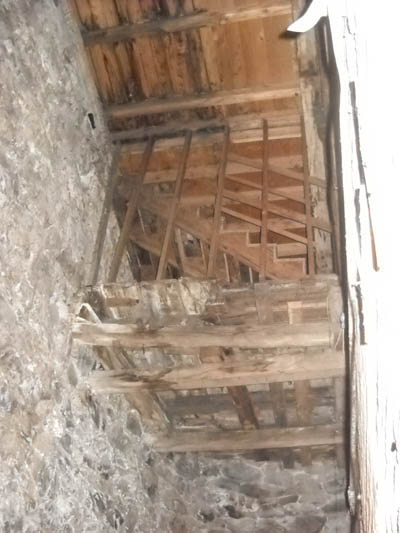 In the rear of the saloon there is an old room which served as a “overflow morgue” for embalmed bodies during the winter months, when the ground was frozen and graves could not be dug. A couple of characters from The Ghost in the Machine and The Wolf Charmer start their afterlives here.  In summer 2010, the crypt was being restored (the wood beams need extensive reinforcement) and so we could only snap photos from the doorway.