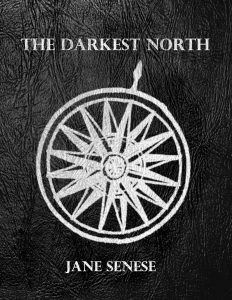 Final revisions on my new novel East of the Sun are underway, but in the meantime, I will soon be offering a bit of a preview of the world of Bifrons in novella (novelette?) format. My 15,000 word story “The Darkest North” will be going live on Amazon in a few days.

As the title suggests, it’s a bit of a riff on the old “Into Darkest Africa” adventure stories. We follow the eager(and hopelessly naïve) explorer Farco Maldwyn on his quest for a safe route through the polar region of Trollmark. He hopes to make his fortune when he publishes the journal of his travels, but it soon becomes an apocalypse log as his fellow travelers are picked off one by one by disease, hunger, parasites and vengeful trolls.

Caught between the Dayline and the Shadowline, Farco Maldwyn and his expedition travel through the thin band on their planet where the sun rises and sets over the course of the 60-day solar year. While the sun is up, the explorers live in fear of deadly flares, and once it sets, they must seek shelter from the agonizing cold… and the many creatures who hunt in the darkness.

From the southerly lands of Morn, Farco is used to a night that lasts for days.  Armed with his musket and specimen bottles, he dreams of making history in the savage northern lands. But he soon learns that there is a reason men have yet to conquer the wilds of Trollmark, as his expedition falls prey to the dangers of the Darkest North.